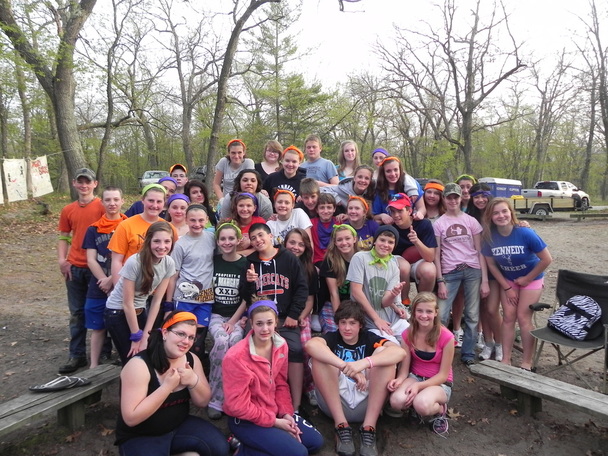 With an overcast cloudy day looming ahead, 39 8th grade students and 6 teachers eagerly departed Kennedy Middle School at 8:00 a.m. for an exciting camping adventure at the Pinery Provencial Park in Ontario, Canada. Over the course of the next several days students developed personal and interpersonal skills through group living and initiative games. As soon as the tents were all set up we met at the campfire to review camp rules and each person's responsibility toward each other and to the care and preservation of the environment.

Here's were the fun began.....Let the games begin!

Students were grouped in two groups (Beavers and Raccoons) to participate in a variety of initiative games including blindfold square rope, duck call, and human pyramid.

Each student was instructed on how to use a compass  (and to not leave camp without one) and competed in egg relay races and the chain gang tire tube. Needless to say, day 1 was filled with a multitude of energizing and engaging
activities as students crawled into their tents at 11:30 p.m.


Our day began bat 7:30 a.m. and was mostly cloudy with limited sky visibility. Our day was planned to test the physical, chemical and biological characteristics of the river water. However, due to the distance to the river from our campsite and the conditions we chose to continue reading the 8th grade language arts book Touching Spirit Bear. This action packed book is about a troubled teen who completely changes his bullying ways after spending a year on a isolated southwestern Alaska island.

Following lunch, the Beavers and Raccoons split off to participate in two outdoor reasoning skill activities. Orienteering is where students use their navigational skills and a compass to navigate from point to point. By mid afternoon the clouds dissipated and provided a perfect sunny 73 degrees for this. Cudos to Mr. Kensicki and Mrs. Malloy for setting up and taking down such a
vigorous course on the sand dunes. The second reasonsing and analyzing activity was led by Mrs. Coffey who presented a scenario in which students had to determine what they would need in order to survive in Michigan's Upper Penisula (thankfully everyone survived).

We also made time for each team to paint their team flags and prepare for a short performance for Thursday night's
talent show which Mrs. Clow and Mrs. Mackewich assisted each group with.

Our evening was partially spent on Lake Huron's beach under a moonlite night where students independently
reflected on life (solo) while listening to night creatures and the rhythmic lake waves as they came into shore.
In wrapping up yet another fantastic day..... were the best ever golden delicious smores and then lights out at midnight.


This by far was the most  interesting day for camping weather as we awoke to a nice sunny morning and ended with a torrential downpour.

Our day began with a tour of the Pinery Nature Center where we watched an educational film on the evolutionary and elusive coyote which has been able to adapt and exist in both human and natural environments all over the globe. We then spent a leisurely (rather wet) 2 hour canoe ride exploring the Old Ausable Channel. For many students this was certainly a highlight as many have never canoed before.  Those that were a little more adventurous engaged in water/splash wars and even went swimming.

With the sun still high in the sky and 90 degree blue skies at 3:00 p.m. it was once again time to go back to the beach
for some more fun.

Now here's where it gets interesting. The plan was to have a scavenger hunt, talent show, and nitro crossing (best initiative game ever!) but then the rain started. As teachers  always do they improvise in a flash and quickly pulled together the picnic
tables and canopys where students huddled together around Mrs. Coffey's ipod stereo system. Honestly, what more does a bunch of teenagers need but some good friends and good music.

Our last day was a somber one as the students didn't want to go home even though the showers were definitely calling them. As we took down our tents and cleaned up the campsite leaving no trace of our time spent there, it was unanimously agreed that once again this had been an amazing eventful trip into the wildness with a bunch of 13 & 14 year olds! 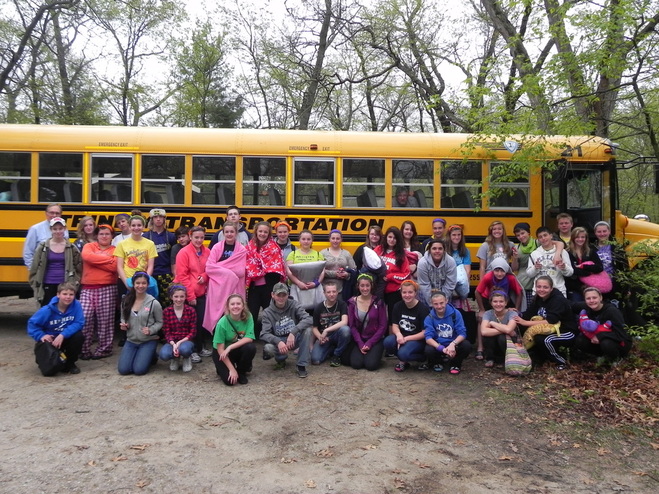